I began my career as a science teacher in 1964, a 19-year-old who had completed a two-year teacher’s certificate majoring in elementary education. It was my goal to be a mathematics and science teacher when I entered Graylands Teachers College; however, the advisors involved in admissions felt that I was better suited to elementary teaching and in those days what the advisor recommended is what happened. Accordingly, I started Graylands in January 1962 and graduated in December 1963. On graduation I applied for a position as a mathematics and science teacher in a junior high school with low expectations of getting such an appointment. My first assignment was to an elementary school in Geraldton, several hundred miles north of Perth in Western Australia. When I arrived at the school I was informed that they had heard I had been reassigned to Northampton Junior High School, a further 50 miles or so north of Geraldton. Even though I was totally unqualified to be a science and mathematics teacher at the high school level I began two years of teaching and with considerable support from the school principal I “learned on the job.”

After two years of teaching “in the bush” I was transferred back to Perth to teach with a highly experienced science faculty at Applecross Senior High, situated in a suburb of Perth. Applecross Senior High was close to the Western Australian Institute of Technology, where I commenced a bachelor’s degree in applied physics while teaching high school science and physics. I am certain that studying for my degree greatly improved my science teaching and at the same time teaching science greatly improved my capacity to learn physics and mathematics. Since I was in a top-notch science department my interests gradually changed from mathematics to science – especially physics. 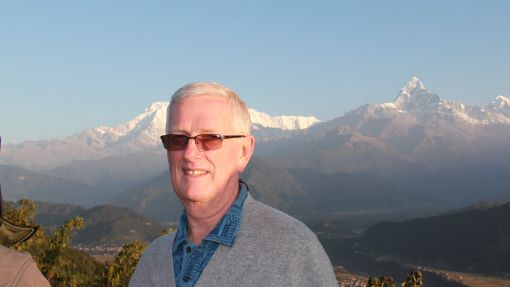 I was a solid physics student and quickly developed an ambition to pursue a graduate degree in physics. I flirted with the idea of studying physics in the United States or Canada and then opted to consider a British university ( St. Andrew’s was my preference). In 1970 I spent a little over a year based in England, where I taught high school science and experienced the Nuffield Science curriculum innovations.
In 1971 I returned to the Western Australian Institute of Technology and completed my master’s degree in applied physics with a major in physics education. It was only after I had completed the coursework component of this degree that I decided to change my emphasis from mass spectroscopy to physics education.

Upon my return to Western Australia in 1971 I was appointed in the curriculum branch of the state education department where I produced curriculum materials for high school teachers. I remained in the curriculum department for approximately 2 years before returning to teach at Applecross Senior High for a year. At Applecross I gained experience of teaching senior high school biology and chemistry. Obviously, these subject areas were out of field for me and I never felt as comfortable in those areas as I did while teaching physics and/or mathematics.

In 1974 I was appointed as a lecturer in science and mathematics education at Graylands Teachers College. It was a great experience to be appointed at my alma mater. After about a year and a half at Graylands a position opened up at Mount Lawley College – a promotion to Lecturer A. The emphasis at Mount Lawley College was on the preparation of elementary teachers. During my time at the college rapid advances in higher education heralded the college being able to offer bachelor’s and master’s degrees. Also Mount Lawley College led the way in Western Australia in the development of computer education courses for practicing and prospective teachers. It was clear to me that to have a future in higher education I needed to earn a doctoral degree and actively engage in research.

In 1978 I left for the University of Georgia to undertake doctoral level studies in science education. Prior to studying in the United States I had enrolled at Murdoch University with the intention of taking a doctoral degree in educational measurement and evaluation. However, I was advised to consider studying for a degree in science education in the United States, rather than completing a “homegrown” degree in Western Australia.
When I returned to Mount Lawley College in 1981 I resumed my previous position but was on the lookout for a move. The opportunity came in 1983 when I was appointed as senior lecturer in science education at the Western Australian Institute of Technology. My appointment was in the Science and Mathematics Education Centre. This was my dream job. SMEC offered master’s degrees in science and mathematics education and was research orientated.

After returning to the University of Georgia on a Fulbright award I was advised to “throw my hat into the ring” for a position at Florida State University. Although I was not especially interested in the position I followed the advice and applied. When I was offered the position as a full professor in science education the job seemed too good to refuse. Accordingly, I migrated with my family to the United States in 1987. I was a science educator at Florida State University for 10 rewarding years.

After being involved in an urban science education project situated in Miami, Florida I decided seek a position in an urban university. I was nominated for a position at the University of Pennsylvania and was delighted to accept a dream position of tenured full professor in the Graduate School of Education. The position reflected a stronger focus on urban education and a weakening of the link with science education. Within the Graduate School of Education we created a doctoral program in Teaching, Learning, and Curriculum (TLC) and most of the doctoral students I supervised undertook science education oriented degrees within the TLC program.

In 2003 the unthinkable happened. One day while I was sitting at my desk the phone rang and it was Joe Kincheloe calling me from the Graduate Center of CUNY. He advised me that “you are being recruited” and to “enjoy the ride.” To my surprise I was eventually offered a position in Urban Education, accepted it, and began in the fall of 2003. Once again I had taken a step away from science education, joining an urban education program as the coordinator of Science, Mathematics, and Technology (SMT). The Graduate Center offers mainly doctoral degrees and in urban education there are three specializations. I was the coordinator of the Learning Sciences specialization (formerly SMT) until I retired in August 2019. At that time I had completed 16 years at the Graduate Center.